Centennial’s recent newsletter indicated they plan to provide 1.3 jobs per household, or approximately 30,000 in all, over its 20-year development period. They indicated that their plan will ultimately cut down on the overall environmental impact of the area by using green technology. In their job creation they hope to attract higher educated professionals and higher wage earners in the scientific, and technical industries, but also to have opportunities for all skill levels.
Centennial commissioned LAEDC ( Los Angeles Economic Development Corporation)
to assist them in locating the best business prospects for the area in the coming years. The LAEDC indicated that construction would be the second highest target job sector. Centennial plans to need approximately 30,000 construction workers just to build the project over the 20 year building process. They are also hoping to attract a large secondary education institution, and a medical facility. In addition, due to the low prices of land in the Antelope Valley they hope to attract manufacturing businesses in the electronic fields. Low priced land and nearby services and facilities with a higher educated workforce should spurn education, healthcare and manufacturing development. Green technology is rapidly growing in Lancaster, Palmdale and Kern Counties with Wind and Solar, so it is already beginning. They expect a multiplier effect where one job produces the need for more jobs and services like retail, community services, and ideally these wage earners will wish to live in Centennial with likely 70,000 jobs created in the area over time. The nearby Tejon Industrial Complex where Hwy 5 and Hwy 99 meet at the bottom of the Grapevine employs one thousand people at IKEA, Oneida, and Famous Footwear, so they have history and success in their past developments.
It looks like Centennial has a real plan to build this upscale city. They intend to complete it slowly and methodically unlike other nearby city planners. We believe that as the development progresses the vacant land in this area will become more desirable and increase in price. We will keep you informed here to the progress in this area and land investment opportunities that arise. This is just another sign that the Antelope Valley shows good long term investment opportunities.
Posted by Vacantlanddeals at 2:06 PM No comments: 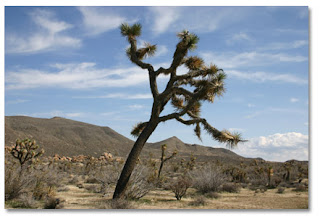 The Antelope Valley and Surrounding areas of Santa Clarita, and parts of Kern County have significant ecological areas (SEA) which were designated in the county's 1980 General Plan. They are intended to protect wildlife migration corridors and valuable habitat for native plants, birds and mammals. Los Angeles County officials define a significant ecological area as an important habitat for native plants and animals or fragile land or water area. Some of the plants and animals in these areas are the Joshua Tree Woodland, alkali scrub, scrub oak, creosote, California poppy, wildflower grasslands, ephemeral streams, burrowing owls, ground squirrels, desert tortoise, bobcats and coyotes.

Growth in these unincorporated SEA areas of the Antelope Valley is limited but not prohibited. There is currently development in these areas, and homes can be built in the Joshua Tree Woodlands, but you will not see urban sprawl like there is in Lancaster and Palmdale, Ca. The SEA areas are guided by the Los Angeles County Antelope Valley Area Plan. The Area Plan designates each property for a particular land use, such as rural residential, urban residential, commercial, or agriculture. In addition, the Area Plan includes a movement plan for trails, bike routes and highways, provisions for the protection of environmentally sensitive areas, and specific policies for each town in the unincorporated area. There was a proposal to preserve over 200,000 acres of Eastern and Western Antelope Valley as a Significant Ecological Zone. That plan earlier this decade would have limited the development of any home in an SEA area to one home per ten acres. Those targeted areas included the Joshua Tree Woodlands and most of the Eastern Antelope Valley from the city limits of Lancaster and Palmdale to San Bernardino County. That proposal was not adopted. Recently there have been a number of Solar Facilities which have gotten approval at of near SEA Zones, so there has been development in or near these areas. In addition a recreational racetrack is nearing approval near the poppy reserve.

Land investors who own land in these areas or those who plan to invest should consider the positives and negatives of any investment in a SEA zone as development is restricted. Some of these areas could be mitigation areas, where the Bureau of Land Management would approve a developer to develop in another area if they buy a SEA zoned area and donate its use and protection to the park service. This mitigation exchange is quite common. Investment due diligence is necessary when making a long term investment.
Posted by Vacantlanddeals at 6:28 AM 1 comment: