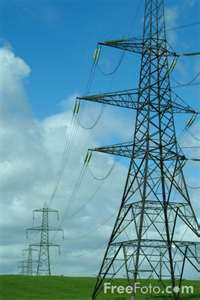 Southern California Edison (SCE) is undergoing a project to install new High Tension power-lines through Antelope Valley and expand existing power lines. The new power-lines will run through Angeles National Forest and run up along 105th Street West to and through the western portions of Kern County. SCE would be required to obtain new easements across over 100 privately owned parcels, as they expand their existing lines and create this new path. The mere mention of a proposed high voltage transmission lines and a new utility corridor in a community causes concern to property values. Eminent domain procedures have been occurring where in some cases 2.5 acre parcels are cut in half to expand current power line paths leaving property owners with tiny remnants of their parcel sitting along the high tension lines. The project will have a direct affect by potentially reducing property values within their visual range. The loss of the panoramic scenic vistas most properties enjoy could decrease the value of their homes, parcels and ranches. Most would agree that power must be supplied from somewhere, but nobody wants a negative effect on their investments, asset or lives. Virtually 90% of western Antelope Valley and Kern County is vacant unused land with small pockets of custom homes and some farming. SCE is proposing to install these power-lines on uninhabited land(investment land), but the long term investor could be affected, or will they?

The issue with power-lines is that it will ruin the view, but mainly the effects of Electromagnetic Field (EMF) that it produces. EMF has many sources and includes overhead power lines, radio broadcast towers, telephone/television microwave transmission and computer equipment. EMF is invisible radio wave energy that in some circumstances can change biological function. EMF from SoCal Edison’s proposed power-lines is called "extremely low frequency" magnetic field, which are produced by high voltage power lines. Several studies have linked high voltage power lines with increased cancer risk for children. Research from the University of North Carolina in Chapel Hill and the University of Colorado found a five-fold increase in childhood cancer, particularly leukemia, in those homes near the highest level of extremely low frequency fields. Homes showing increased cancer risk were within 48 feet of power line wires designed to carry very high electric currents and within 22 feet of power lines designed to carry lower currents. Risks of breast cancer, depression, and other negative health effects are based on much more limited evidence and are even more speculative. There is enough information to have some concern, but not enough to set exposure standards they indicated. Other studies have indicated that the question of a "safe distance" is, at least, a complete unknown.
National Institute of Environmental Health Sciences (NIEHS) said that the "strongest evidence" for health effects comes from statistical associations observed in human populations with childhood leukemia and chronic lymphocytic leukemia in occupationally exposed adults such as electric utility workers, machinists and welders. "While the support from individual studies is weak," according to their report, "these epidemiological studies demonstrate, for some methods of measuring exposure, a fairly consistent pattern of a small, increased risk with increasing exposure that is somewhat weaker for chronic lymphocytic leukemia than for childhood leukemia."
However, laboratory studies and investigations of basic biological function do not support these epidemiological associations, according to the report. It says, "Virtually all of the laboratory evidence in animals and humans and most of the mechanistic studies in cells fail to support a causal [cause and effect] relationship."
While sections of the report say EMF exposure "cannot be recognized as entirely safe," the report concludes: "The NIEHS believes that the probability that EMF exposure is truly a health hazard is currently small. The weak epidemiological associations and lack of any laboratory support for these associations provide only marginal scientific support that exposure to this agent is causing any degree of harm."
Research continues on some "lingering concerns," the report says, and efforts to reduce exposures should continue.

It appears from the studies that the risk of power-line exposure is possible, but also maybe only a small hazard. The risk is enough for some land investors to not buy land near power-lines or sell at a reduced rate. We have observed numerous housing projects, strip malls, restaurants, and businesses operating along high tension power-lines. You can do your own visual research, and you will find medium sized high tension power-lines in and around densely populated areas. Development occurs in all facets around these power-lines, so in the long term when development is needed builders will buy and construct at and near power-lines. It may occur in the later stages of development, but when your parcel is surrounded by development then you can ask the highest value. Our conclusion is that property investment has its risks, but for longer term investors even power-line property can be profitable. But as there is an abundance of unencumbered land available in Los Angeles County then buying land today closer to development and services is a better investment today.
Posted by Vacantlanddeals at 8:18 AM 1 comment:

Lot loans can be much more difficult to obtain than a typical home loan. Getting a mortgage loan for a home or condo may require a higher down payment and a good credit score in today’s loan market, but it is easy enough to obtain even with a thirty year payback. If you want a loan for raw land well today that is maybe mission impossible. There are no banks that we are aware of that will offer a 100% loan for raw land purchases. IndyMac Bank of Pasadena was one of the first banks to be taken over in the last financial crisis by the FDIC in 2008. Its assets were absorbed by OneWest Bank. We have found that IndyMac provided loans of up to 85% of the land value. A number of those properties were foreclosed on and resold in the past year. Other major banks like Bank of America and Wells Fargo have foreclosed on some land owners and have resold those properties in the last few years also. Yet we are not aware of the details of those foreclosures. A direct loan from a bank for a land parcel is likely a thing of the past as banks require more security and undeveloped land provides no bank security as raw land is more speculative and has no improvements.

Another option may be an “owner will carry loan” (OWC). This is a seller financed loan where the land seller gets interest from the buyer over time. These are typical monthly payments at normally competitive interest rates. These types of loans are usually short term from as low as three to fifteen years. They can be longer or even shorter terms. You should expect to pay current market interest, and we advice you get a no penalty for early payment. The down payment (deposit) is usually higher. An example may be a $20,000 property would require a $5000 deposit. The balance of $15,000 paid monthly at 7% interest over 5 years. In this case you would pay $297/month over 5 years or $17,820. This is an easier way to purchase land over time without the need for bank credit. If you fail to pay then the seller can foreclose on the note and the seller retains the deposit and any payments you have made. This process is very common in the purchase of raw land.
For more answers on land opportunities and owner will carry options contact us at vacantlanddeals.com
Posted by Vacantlanddeals at 6:22 AM 1 comment: